Iain Dougan previews the key match in the Scottish Premiership.

Celtic will be looking to maintain their unbeaten record in the Scottish Premiership this season when they travel to McDiarmid Park today. St Johnstone will be hoping that they can reverse their fortunes of recent weeks, having not recorded a victory in the Premiership since the start of November. Having had Rory Fallon sent off after 51 seconds against Aberdeen and Paddy Cregg sent after 34 seconds against Hibs in their last two matches, perhaps having a sub last more than a minute will be an achievement for the Saints in itself…..

Away Day Joy For Celtic

Celtic huffed and puffed against a Hearts side last week so decimated by injury and administration that ‘parking the bus’ was the only option available to Gary Locke, to ensure that another humiliating defeat didn’t ensue. Hearts keeper Jamie MacDonald pulled off a string of saves that Celtic’s Fraser Forster would have been proud of but another game passing without a goal for one of his strikers must be a worry for Lennon.

Celtic have looked more comfortable away from home than at Celtic Park this season so Lennon will be hoping that the trip to Perth is as bountiful as his team’s recent trips to Edinburgh and Motherwell. Lennon however is expecting a much harder test over the festive period,

“We have two really tough games – St Johnstone away and then Inverness away, so it will really test the players. We obviously want to keep the unbeaten run going and get a decent performance in both games. “

Off the pitch confusion appears to reign as to whether flags and banners have been banned for the game in Perth or not. The original ban appeared to have been retracted but the police had confirmed that this wasn’t the case – at the time of writing the retraction has been retracted so flags and banners are permissable. Confused? Regardless of the police/clubs position it is a futile move – the motivation is to stop people from hiding flares and smoke bombs in them but surely people who want to bring this type of (banned) material in will stick them up their jumper or down their trousers?

Maybe the solution is to introduce a St James Park style ‘taps aff’ rule where jumpers are banned. Or maybe Scottish football fans need to grow up and not allow one of the worst and most dangerous excesses of continental football to permeate our game. People have been killed by flares at football matches – yes it looks impressive but fans looking for flare related entertainment should stick to watching re-runs of Biffly Clyro’s majestic set at the Reading festival

St Johnstone will be looking to recapture some of their earlier season form which has slipped over the past few games, if they want to reignite their hopes of qualifying for the Europa League. The club sit sixth in the Premiership at the moment, 10 points off of European qualification. Given their good victory against Rosenberg in the early stages of the competition last season, this will be seen as the target for Tommy Wright although given the current form of Dundee United and Aberdeen it may prove too much of a  stretch for the Perth side. Wright is under no illusions as to the challenges his side face,

“We’ve been given a few warnings this season of just what they can do. They went to Motherwell and won heavily, so they can destroy teams and we need to be wary of that.”

In Stevie May St Johnstone have one of the outstanding strikers in the Scottish Premiership this season – it would be surprising if Celtic weren’t monitoring him closely, though he may be tempted with a move down south in the January window.

Celtic will be without Mikael Lustig for the next 4 months due to his hip injury. Lennon has the option of re-introducing a fit again Adam Matthews or to continue with youngster Darnell Fisher, who has been solid if not spectacular in his last few outings. Charlie Mulgrew and Dirk Borrigter remain unavailable along with Beram Kayal.

Injuries may force Lennon’s hand in playing Samaras and Ledley – it will be interesting to see how much game time they get ahead of a January transfer window, with both players set to leave the club. James Forrest should start following a game changing appearance off the bench last week.

St Johnstone have Paddy Cregg available for selection following his appeal against his red card at Hibs. Murray Davidson is likely to miss the match having struggled with a knock, his substitution leading to Cregg’s 34 second cameo. Rory Fallon remains suspended and Chris Millar is out injured, leaving Tommy Wright with some selection challenges ahead of the game. 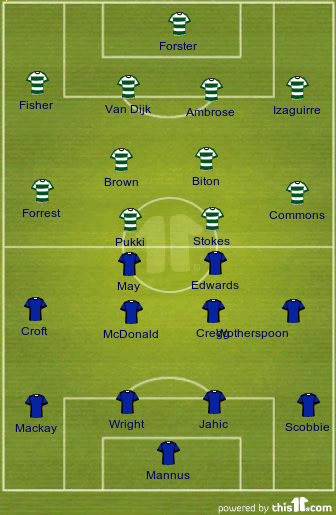 Van Dijk vs May

Stevie May has a better goal scoring record than any Celtic striker this season. However, Van Dijk has looked an accomplished defender and a contender for Celtic’s player of the season. If Van Dijk can keep May quiet Celtic will have a great chance of maintaining their unbeaten record in the SPFL.

Teemu Pukki has the haunted look of a player destined to become another damning indictment of Neil Lennon and John Park’s failure to be able to sign a functioning striker. Against Hearts he looked uncomfortable and had developed ‘Samaras-itis’ where Celtic strikers feel the need to drift wider and wider to get the ball, leaving nobody available for the cross that is created.

Lennon has alluded to Pukki’s difficulties in adjusting to life in Glasgow – Celtic fans would love to see him come good but the fact that he didn’t kick on after scoring against Hibs is worrying.

Celtic fans to be allowed to choose up to 6 flags or banners from what the police have collected and bring these in as long as they are checked first to confirm that there are no smoke bombs sewed into the lining.

Airport style full body scanners to be introduced to ensure nobody has a flare up their arse.

Simon Neil from Biffy Clyro to provide half time flare show to help the Green Brigade get over their withdrawal symptoms, soundtracked by K’Naan’s 2010 world cup anthem ‘Wave Your Flag’.

On the pitch? Celtic have saved their best performances for their away fixtures and I don’t see today’s game being any different. Celtic to win 3-0, Lennon to continue to frustrate me by not giving any of our youth players a chance.

90 Minute Cynic is a football website covering the important issues in the modern game. We follow European football with a distinct focus on the Scottish & English Premier Leagues. As part of the Hail Hail Media network, we cover Glasgow Celtic on our very popular podcast. We also seek out interesting and funny stories from all corners of the globe, bringing an analytical yet enjoyable spin on football podcasting.

'Will Celtic’s Away Day Joy Continue In Perth?' have no comments