Matchday two in Serie A kicks off this weekend and Saturday night sees Udinese travel to Turin to face reigning champion Juventus.  Both sides got off to the perfect start with Juve defeating Chievo 1-0 and Udinese convincingly beating newly promoted Empoli 2-0 at the Stadio Friuli.

Although they’ve won  the last two Scudetti, the departure of Antonio Conte in the summer makes it difficult to predict how Juve will fare this season.  There are a lot of skeptical Juve fans, including myself, in regards to new coach Massimilano Allegri but he deserves to be given the time to make things work at the Old Lady.  Despite a fairly low profile transfer window, with no big money signings made, Juve’s transfer window should still  be seen as a major success in the fact that Arturo Vidal and Paul Pogba have remained at the club.  Both were widely expected to leave Turin if a big money offer came, but it never did and Allegri will be extremely happy that he has two of the world’s best midfielders still in his side.
Last weekend Juventus got their Serie A campaign off to good start beating a difficult Chievo side 1-0 in Verona.  Although the match only finished 1-0, Juventus hit the woodwork three times and completely dominated the match from start to finish.  After the match Allegri commented on his side’s performance;

“There are good signs, I’m happy enough,” Allegri said. “But there is a lot to improve. I was more worried than angry at the end. We should have closed the match and instead we risked them equalizing.”

Perhaps the biggest positive of the match was the performance of surprise inclusion, 18 year old youngster Kingsley Coman. The young Frenchman was fantastic on his Serie A debut and he looks like he has a big future ahead of him.
Allegri will expect nothing but a win this weekend against Udinese and another victory would be another step towards getting the skeptical Juve fans to get behind the former AC Milan manager.

Udinese are in a similar situation to Juventus, in that they are also starting a new era.  Francesco Guidolin stepped down during the summer after four seasons at the Friuli.   Andrea Stramaccioni has taken over in the dugout and he has big boots to fill.  Despite an average final season at Udinese, Guidolin was a fantastic coach for the Friuli and was a terrific success, whose achievements include qualification for the Champions League in back to back seasons.  After such a difficult and unsuccessful time in charge of Inter Milan, new coach Stramccioni will be hoping he is the right man to success Guidolin and push his side towards a top six finish once again.
Udinese got their season off to a great start in match day one, comfortably defeating new promoted Empoli by two goals to nil, both coming from the veteran Antonio Di Natale.  Coach Stramaccioni was delighted with his teams performance, especially that of Di Natale;

Firstly, I must say congratulations to Empoli who made things difficult for us,” he said when talking to Sky Sport Italia.
“I think in the second half we did very well to bring home a well-earned win. Di Natale was really wonderful. He had a super pre-season and had prepared so well so he is now in amazing condition.
“He is not only important in terms of goals but rather his overall contribution to the team he is so crucial.”

With tough ties coming up against Napoli and Lazio, Stramaccioni will look to try and come away from the Juventus game with something going into those two matches.

There are some major injury worries for Allegri this weekend as the injuries are already mounting up for the Old Lady.  Tevez (hamstring), Arturo Vidal (thigh), Andrea Pirlo (hip), Andrea Barzagli (Achilles) and Giorgio Chiellini (calf) are all out of this weekend’s tie meaning Allegri already has to dig deep into his squad.  However, Allegri will be pleased by the return of summer siginig from Real Madrid Alvaro Morata who will be in the squad for this weekend.
Stramaccioni’s only real injury worry is that of the Brazilian Gabriel Silva who isn’t expected back until mid September. Pasquale should keep his place in the left wing back position due to Silva’s injury 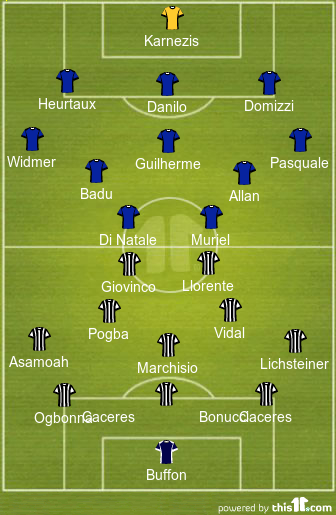 How do you think Allegri will do at Juventus? Can Udinese pull off a shock result? Let us know below or on Twitter @90MinuteCynic. You can follow Marek @Don_Fulcio.