Joint top Roma host high-flying Verona at the Stadio Olimpico this Saturday evening in a match that Roma will be hoping to win to keep the pressure on main title rivals Juventus in their challenge for the Scudetto. Meanwhile Verona will be hoping that they can get something from this game and maintain their excellent early season form.

The resurgence of Roma began last season under French coach Rudi Garcia, a man who has transformed Roma from a struggling top six side to serious contenders and possibly favourites to lift this year’s Scudetto. Last year they fell just short of a dominant Juve side but the signs were there that this Roma side are on the up, in terms of Serie A and possibly even the Champions League. After a very good summer transfer window for the Giallorossi the strength in depth Garcia has in his side is impressive and Juventus will have a much tougher task this season in retaining the Scudetto and their third in a row.

After four matches in Serie A so far it has been an almost perfect start from Rudi Garcia’s men with four wins out of a possible four and despite the sale of Medhi Benatia they have only conceded once so far in the midweek tie against a tough Parma side. After the 2-1 victory over Parma on Wednesday evening Garcia commented:

“We played well with a very good first half that had quality possession.

“It’s always difficult to come to Parma and I really like Donadoni, even though we saw a more defensive Parma tonight.

“I am very happy for Adem Ljajic, and I knew at the break we’d probably struggle on set plays. Other than those, we weren’t really allowing any chances.

“How did we resolve the situation? Gave Pjanic the ball and watched him score a genius free kick.”

Roma have also started their Champions League campaign in style, destroying CSKA Moscow at the Stadio Olimpico by five goals to one, a result that will give them great confidence to qualify from a very tough group that also contains Manchester City and Bayern. With an extremely difficult away tie coming up in midweek, Garcia may be tempted to rest a few big names at the weekend against Verona, but I feel he will prioritize the Scudetto this season and use the Champions League as a learning curve building towards the future.

With the injury list mounting and the midweek clash against Manchester City Garcia will have to dig deep into squad. Daniele De Rossi is the latest in a growing injury list that includes Juan Iturbe and David Astori, however Garcia refused to panic and is confident of his squad.

“De Rossi is an important player, but now we have to take care of him,” the Frenchman said in a press conference on Tuesday.

“We will wait until after the international break to avoid the risk. In midfield we have other options.

“The run of injuries? I don’t know if this sort of thing has happened before, but it can happen. It is for this reason that we have built a big squad, for the many commitments that we face.

“We have a big squad, I am confident that the players will give their best and that the level of the team will not change.”

Even though it is so early on in the season Roma will see this weekend’s match as a must win as they will not want to give up any ground to title rivals Juventus.

After a very respectable first season back in Serie A, Verona finished a very respectful tenth place last season. In fact Verona were very much in contention for a European place but inconsistency plagued them for the last ten matches of the season and they unfortunately missed out.

Verona have got off to a terrific start this season in their first four matches, winning two and drawing two. They currently sit in fifth place, ahead of the likes of AC Milan, Fiorentina and Napoli and coach Andrea Manorlini has done a terrific job since taking over in 2010.

In Verona’s midweek match at home to Torino the home side found themselves two goals down after a Alessandro Matri double. However the character and fighting spirit of Manorlini’s side shone through once again as they managed to pull the match back to 2-2. After the match Manorlini praised his side’s spirit but was still adamant there is a lack of balance in the side.

“We had two clear chances to score, but then Matri punished us and scored with his,”

“It was a blow, the team never gave up, we went to 0-2 but we never gave up. I must also thank the trust of the fans, which helped to turn around a tough game.

“We could also have won, the group has put everything into attack and created the chances. We deserved three points, but we also risked losing it.

of some dangerous counter-attacks, but Verona has a big heart and a great desire, so I am happy”

Verona may not expect to get anything from this match but don’t expect Manorlini’s boys to lie down, they will put a fight and try to take something away from the capital. If they manage to do that it would be a major morale boost for Verona in their fight to qualify for the Europa League next season. 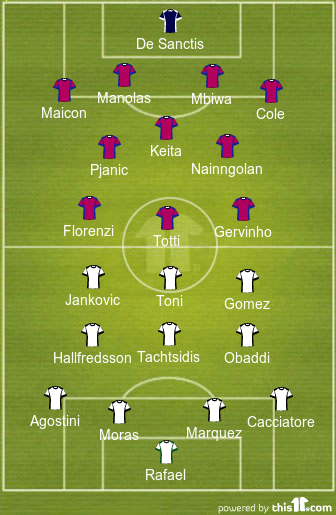 Can Roma push for the title this season? Will Verona push on from there impressive showing last season? Let us know below or on Twitter @90MinuteCynic. You can follow Marek @Don_Fulcio.