Celtic need just seven points from their last nine games to secure a second title in as many years. Neil Lennon will be keen that the league is wrapped up as soon as possible – both in terms of hitting his 100 point target as well as resting players after what has been a long season that started in July with Champions League qualifiers. They face a St Mirren side desperate to avoid finishing 11th and therefore missing out on a relegation play off – any points gained will be a major bonus in a battle where even Hibs in 7th place could be drawn in.

Celtic’s 3-0 victory against Kilmarnock was notable for two things – another game making performance from Kris Commons who again proved to have a defter touch in front of goal than  any of the recognized strikers and a promising debut from 17 year old Liam Henderson. Adam Matthews was quick to praise the debutant:

“He’s shown in training this season that he’s a top player and he didn’t look out of place at all when he played against Kilmarnock. We’ve got a few good youngsters coming through, but Liam’s got to be up there. He showed everyone against Kilmarnock that he can definitely play at this level and it was a really good display from him.”

With Nir Biton still out it is likely that Henderson will make his home debut tomorrow and be given another opportunity to shine with the first team. Hopefully Henderson will be the first of many youngsters who are given a run in the team prior to the end of the season – it would certainly give the fans some excitement and something to look forward to once the title has been presented. Who knows maybe even Amido Balde will get a game?

Danny Lennon will be keen to avoid the chance of joining Rangers and Hearts in the Scottish Championship next season by finishing 10th or better. With Hearts due to come out of administration prior to relegation eradicating any chance of further points deductions it looks like it would be a very difficult task to guarantee promotion if an SPFL side was unfortunate enough to lose the play off. The teams likely to face the SPFL side are either Dundee, Hamilton or Falkirk – given than all have relatively recent SPFL experience it is sure to be a close contest and one much better avoided.

In the pre-match press conference Marc McAusland admitted that Celtic’s forward players were giving them plenty to think about ahead of the match:

“I know that right now everyone is talking about Kris Commons as the player of the year and you can’t really argue with that. He has been outstanding all season and it is not just about the goals he scores. But for me the big concern is Leigh Griffiths. Every time he ran out for Hibs against us he seemed to get on the score sheet and he is a very difficult player to shut down.”

For Charlie Mulgrew the focus is on dispatching St Mirren and presumably swapping Lennoxtown for a deck chair in La Manga as soon as possible by winning the league:

“We want to get it done as quickly as we can and win the next three games hopefully. Every team that comes to Celtic Park is up for it, so we need to match that, be prepared for the challenge, win the battle, and then hopefully our football can come out on top.”

Neil Lennon faces some selection challenges ahead of the match with Emilio Izaguirre and Giorgios Samaras out through illness. James Forrest and Nir Biton remain out following injuries picked up in international friendlies and in a shocking turn up for the books Derk Boerrigter is also out. The good news is that if M Night Shyalaman ever needs to re-cast Samuel L Jackson’s “Glass Man” character in a sequel to Unbreakable he will find a fantastic candidate in the east end of Glasgow.

In better news Virgil Van Dijk is back after his on again/off again appeal for his red card against Aberdeen. For St Mirren Jim Goodwin returns from suspension and Eric Djemba-Djemba is fit again however David Van Zanten is still missing. 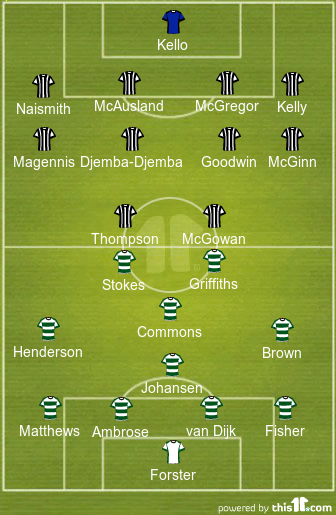 Griffiths will be keen to get on the score sheet again and continue to win over any Celtic fans with remaining doubts about his worthiness of wearing the Hoops. I am excited seeing him in a Celtic line up – the key will be ensuing he has the right strike partner to gel with ahead of next season’s Champions League games where he will be given his toughest test yet.

It’s been a long time since a really exciting young player was given the opportunity for an extended run in the Celtic first team (James Forrest no longer counts despite Lennon’s protestations to the contrary). Henderson looks like an interesting prospect – it will be an interesting test for Lennon in terms of how he nurtures his talent and ensures that expectations are kept grounded.

Despite how motivated St Mirren will be to take any points from this game I can’t see them taking anything from the game. Celtic’s forwards are on great form and I expect them to perform and deliver.

What do you think of Iain’s prediction? Is Henderson good enough to be a first team starter for Celtic? Can Leigh Griffiths grab another brace against the Saints? Let us know your thoughts below or on Twitter @90MinuteCynic.