Ronnie Deila faces a defining period in his Celtic career over the next few weeks as he attempts to recapture some form domestically and being his quest for qualification from the group stages of the Europa League. Aberdeen will be looking to re-capture some of their excellent form from their games against Celtic last season in a bid to provide a boost to what has been a fairly lackluster start to the season. A win and some attractive football looks to be the minimum requirement as he gets a first chance to field his summer signings.

There is a real buzz about the Celtic fans that certainly wasn’t there as the final whistle blew at Dens Park two weeks ago. Celtic had been held to a 1-1 draw by Dundee in an uninspired performance that posed more questions than it answered. Fast forward 48 hours and the capture of two genuinely exciting looking strikers and the fact that Virgil Van Dijk had managed to get over his ‘lack of focus’ and remain at Celtic had left Celtic looking far stronger than we may have expected come the end of the transfer window. This is despite the farcical nature of both the Scepovic saga and the missing paperwork that held up the Guidetti signing meaning that he missed the deadline for the Europa League squad and left Celtic fans holding on for a further 48 hours to find out whether the signing would be ratified by FIFA.

Deila has interesting selection dilemmas all over the pitch, none more so than up front. Despite having played Stokes in most of his games so far it is almost certain that he will drop to the bench to make way for either Scepovic or Guidetti as a lone striker/front player in a 3 depending on how Celtic set up. There are pros and cons for starting both – as the only player who we paid a fee for in the window it would stand to reason that Scepovic would be expected to start – particularly given that Guidetti is ineligible for the Europa League. 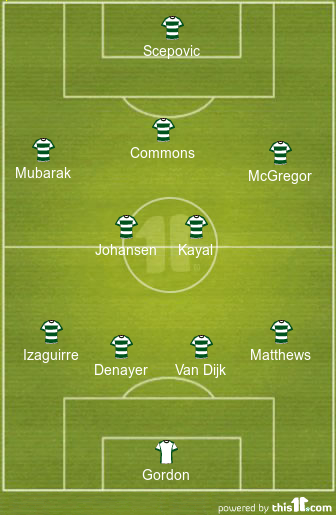 Despite being a loan signing Guidetti really feels like he might have the X-Factor (and no this isn’t a reference to either of his signing exploits that were helpfully re-discovered when he joined. Here and here for some cringe worthy seasonal crooning). It hasn’t been disclosed as to whether Celtic have agreed any fee for Guidetti at the end of this loan period but his wages don’t seem a million miles away from Celtic’s wage structure – certainly if he can replicate his form at Feyenoord rather than what he produced at Stoke then you sense that the fans will quickly forget that they can no longer have a Pukki Party at Parkhead and may have a new favourite Swede.

Guidetti was certainly making all of the right noises when he faced the press yesterday:

“It’s a massive football club, known in the whole world for their amazing history and amazing fans. The club is very well known in Sweden for the people that have played here before and the things they have done here. When Celtic come you don’t say no, at least not me.”

In showing his willingness to undertake any role whether large or small for Deila he has already done a far better job at endearing himself to the fans than Scepovic:

Deila was able to confirm some welcome news that Scott Brown’s return to the team is imminent – there is even a chance he could line up this afternoon though a place on the bench seems more likely. There was even better news for 90 Minute Cynics with the news that Charlie Mulgrew is injured for a month after picking up a knee injury on Scotland duty.

Mulgrew is another player who Deila had come to rely upon but its difficult to see where he fits in the side when everyone is fully fit. Wakaso Mubarak may be another debutant but Aleksander Tonev has been training but is unlikely to be risked for the game. James Forrest remains out with a hamstring injury.

Derek McInnes has so far not been able to get his Aberdeen side to click into top gear this season with two wins and two defeats a poor return for the team that were most pundits favourites to mount a challenge to Celtic’s dominance, or failing this, at least win the “2nd place” league. If his side play anything like they did against Celtic last season Deila is in for a very challenging afternoon as he remarked at yesterday’s press conference.

“Aberdeen is the biggest club besides Celtic I think – they have a good team and they beat Celtic twice last year, so it’s going to be an exciting game.”

McInnes was aware that he may be facing Celtic at a good time in terms of their transition under Deila but remained cautious given the threat that Celtic carry:

“Celtic have got their threats in forward areas – they play with good energy when they’re at their best. We probably saw that coming to the fore against Dundee United.”

He went on to add:

“They have been a bit inconsistent since the start of the season, there is a bit of a transition and the manager is trying to get his ideas across. But, regardless of manager, system and any changes, there are still good players that we are up against and we have to be mindful of that.”

McInnes faces six weeks without his young left back Clark Robertson who picked up an injury when on Scotland Under 21 duty, club captain Russell Anderson remains out. 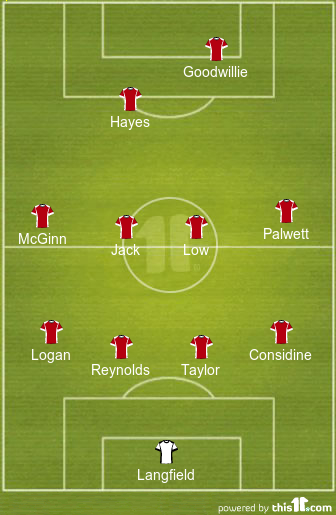 Peter Pawlett was tentatively linked with a move to Celtic on deadline day and has the honour of regularly featuring in 90 Minute Cynic discussions about SPFL players who would make Celtic a better team. Izaguirre has looked nearly as out of sorts as Ambrose since returning from the World Cup – it may be an afternoon for Pawlett to add to Izaguirre’s poor start to the season.

Deila vs His Doubters

This really is where Ronnie Deila has to start showing that he is ‘Celtic Class’. Everyone has been willing to give him time to adjust to a club and environment far bigger than anything he has faced before and excuses have been made regarding the playing squad he inherited. Having been through a transfer window and had the opportunity to bring in players it is time for him to show us whether he has the bottle to deliver on the vision that brought him to the club.

Last 5 Results between the teams

This is going to be a close one. I’m hoping Celtic can raise their overall performance and win 2-1.

WHO WILL COME OUT ON TOP IN GLASGOW? WILL ABERDEEN HEAP MORE MISERY ON DEILA? COMMENT BELOW OR TWEET US @90MINUTECYNIC