It’s fair to see that Ronnie Deila and his Celtic side have faced a tough week – in fact tough is a significant understatement. On paper it was always going to be challenging to go to Inverness between two Champions League qualifiers and the 1-0 defeat looked a reasonable result given that 10 changes had been made to the starting line-up. When 9 of the 11 returned to the starting line-up against Maribor a much stronger performance was expected – unfortunately this failed to materialise and as a result Celtic now move on to the Europa League and the significantly lower financial rewards that it brings (more details on Celtic’s Europa League opponents can be found here). Deila now has to pick his team up for a visit to newly promoted Dundee who are unbeaten since their return to SPFL.

Deila’s decision to drop 10 players against Inverness seemed a refreshing move – there was a clear focus on ensuring that his preferred 11 were rested ahead of the Maribor game. Given Lennon’s slavish determination to finish last season unbeaten and then ‘the magic 100 points total’ it was interesting to see Deila take the view that in time the league will take care of itself and that Europe had to be the focus. There were two downsides to this strategy – first of all when you don’t go on and win the subsequent European game you look pretty stupid (more on this later).

The second, and potentially more worrying aspect, was how poor the players who came into the team looked. There was not one player who staked a claim for the 1st team – surely Dylan McGeough must now move to the pile of ‘nearly but not quite’ youngsters who have failed to make the grade at Celtic Park.

Leigh Griffiths looks fat and uninterested and if a rumoured loan approach from Easter Road is confirmed then they are welcome to him. Aside from Emilio Izaguirre, we don’t appear to have anyone else at the club who can play left back with one of the Twardzik twins hooked after 45 minutes. What this says for players like Amido Balde, who didn’t even make the squad, is anybody’s guess.

Deila will need to find the right balance between having a squad capable of coping with 6 Thursday/Sunday games and moving on some of the utter dross that passes for Celtic players at the moment.

Berget had a frustrating match on Tuesday

Champions League excitement gave way to Champions League nerves as the day wore on – as a Celtic fan you learn never to take these results for granted but deep down I fully expected Celtic to progress. How wrong I was. The tactics and line-up that were employed in the first half had the juxtaposition of looking defensively light, coupled with a complete inability to mount convincing attacks. We were abject with only McGregor, Van Dijk, Lustig and Gordon receiving pass marks – for the first time it looked like Deila didn’t have a clue what he was doing and the players didn’t look much better.

The half time introduction of Kris Commons for Beram Kayal, who was perhaps unlucky to have been substituted, gave Celtic slightly more impetus going forward. However, it always felt that we would need a goal and when McGregor hit the bar you sensed it wasn’t going to be our night. When Maribor made the breakthrough it was from a scrappy passage that was probably against the run of play but Tavares finished impressively to beat Gordon and condemn Celtic to the Europa League.

The post mortum continues as to where to lay the blame for Tuesday night. It’s difficult to think of anyone who escapes blame when they come under the spotlight. Deila has inherited a squad that is significantly under-equipped to compete in the Champions League – the blame for this has to lie at the door of the previous management team and the Board. Too many signings from last season failed – only two players signed by Lennon started on Tuesday which is difficult to swallow when we spent over £10m.

Deila needs time but isn’t blameless – the tactics and potentially the starting line up were wrong on Tuesday night and he needs to learn quickly to ensure that Celtic can have a decent run in the Europa League. 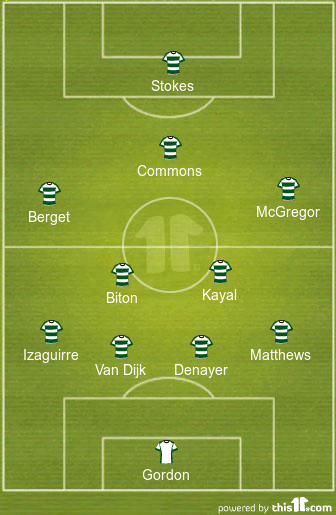 The fans should also look at the expectation levels being demanded at the moment – we lost 6-1 to an average Legia Warsaw team and despite a better showing in Slovenia the best part about our reinstatement to the Champions League was always going to be a guaranteed Europa League spot. Hull spent £21m this summer and failed to qualify for the lesser European competition being knocked out by a side with a coefficient significantly lower than either Maribor or Legia Warsaw’s.

Deila was quick to acknowledge his part in Tuesday’s failure but pleaded for time to see his ‘project’ through.

“I take all the criticism. I understand it. I’m disappointed as the fans. I have to build a team who can go into the Champions League next year. In one year, it’s right for the fans and everyone to judge me, and I will take it, no problem.”

Deila has two keye focuses over the next few days – winning at Dundee and ensuring that come midnight on Monday he has brought the right players through the door. This also includes considering who is allowed to leave – if we are ready to cash in on Van Dijk then there needs to be a plan to replace him that doesn’t involve Efe Ambrose.

Paul Hartley is relishing the opportunity to test his managerial mettle against his old team.

“We’ll give it our best shot,” he said. “It’s the champions who are coming to town and these are the kind of games you want to be involved in as a manager and as a player. It should be a great atmosphere and we’re really looking forward to it.”

For Celtic, Sunday’s game will come too quickly for Alexander Tonev who is due to resume training on Monday however, Wakaso Mubarak may feature in the squad. Scott Brown is a couple of games away and his presence and leadership are being desperately missed. Mikael Lustig went off with a knock on Tuesday night and is likely to miss out. Paul Hartley has a number of striking options to narrow down following his sides 4-0 win over Raith Rovers in midweek. Kevin Thomson is recovering from a calf strain but is unlikely to make the match and Willie Dyer is still struggling with a knee injury. 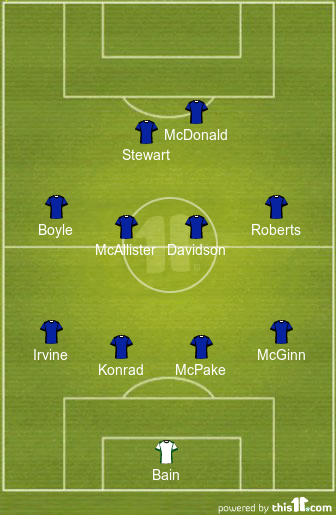 Ronnie Deila is finding out exactly how long the honeymoon period lasts at Celtic and how he motivates his team to get back to winning ways on Sunday will tell us a lot about his character. Everybody can see that he needs time but this is a luxury commodity rarely afforded to managers in Glasgow – just ask Ian McCall. For Paul Hartley it’s a no lose situation with anything other than a hammering going towards building his impressive record as a manager so far.

Commons vs the system (and the window)

Kris Commons is a mercurial talent – last season he was unplayable and was rightly player of the season finishing top scorer. In the previous season he barely made a mark with a constant stream of injuries preventing him from building any form. You get the sense that Commons is a player who’s ego needs to be constantly played to and Deila doesn’t appear to be the type of manager to go in for this – as a result we have seen more of the 12-13 Commons this season than the 13-14 one.

Deila talked about Commons being the type of player you can build a team around but experience so far suggests that it is Commons who will need to adapt to Deila.“Mrs Commons” says that there are no suitcases being looked out in the Commons household but with rumours of a significant wage hike being requested it wouldn’t surprise me if Commons wasn’t a Celtic player come Tuesday.

We may get a sense of how this will play out a) if he starts and b) if he looks more interested than he did in Inverness.

I think that Deila will get the high pressing, high tempo attacking football going again and Dundee could befall the same fate as their across the road neighbours. Celtic need to be raring to go for this one – I think they will be and will win 4-1.

WHO WILL COME OUT ON TOP IN DUNDEE? WILL HARTLEY OUTFOX DEILA? COMMENT BELOW OR TWEET US @90MINUTECYNIC