Ronnie Deila’s first domestic competitive fixture sees his team taking the journey up the A9 to visit St Johnstone. Deila will be keen to see how his players react to their 3-0 victory against Legia Warsaw that saw them scrape through their Champions League qualifier on away goals. For Tommy Wright it’s a case of seeing what life ‘after May’ holds for his side after prized striker Stevie May was sold to Sheffield Wednesday for just under £1m.

Deila’s first four games in charge have arguably been two thirds of the most important games that he will encounter this season. A 50% win record from these matches is not exactly the start which he will have dreamed of, however, with the nightmare that was Legia Warsaw now effectively wiped from the record books, Deila will be looking for a significantly improved performance in the ‘Business As Usual’ of the Scottish Premiership. He has tonight and the game against Dundee Utd to firm up who will be in his starting 11 for the trip to Maribor next Wednesday – what him and the fans will be looking for is a marked improvement in both the performance and attitude from the players that he has inherited from Lennon.

Can Celtic get over the crushing defeat in Edinburgh?

When Legia Warsaw’s 6th goal went in against Celtic it looked like Neil Lennon had played a masterstroke in leaving the building just prior to everything falling to pieces aka “doing an Alex Ferguson”. A significant amount of the blame for Celtic’s poor start to the season has to fall at Lennon’s door – with the exception of Craig Gordon and Jo Inge Berget the squad that Deila had at his disposal for the first two rounds were Lennon’s.

I stated last January that Lennon may not have the stomach to build a new team – his lack of forward planning has left Deila in a position where he is at a significant handicap with a squad of players who don’t look capable of carrying out his vision. Whilst the situation Deila has inherited will do no harm to Lennon’s burgeoning media and calendar career, it may make club’s think twice before offering him one of the ‘bigger jobs’ that he left for.

Celtic made two new signings prior to the Champions League deadline but it is unlikely that either will feature tonight. Aleksander Tonev has a knock and will not make the squad, whilst Jason Daneyar looks to be more of a backup option to Virgil Van Dijk and Efe Ambrose, who has returned to his bomb scare roots after doing a serviceable impression of a Centre Back for the majority of last season. 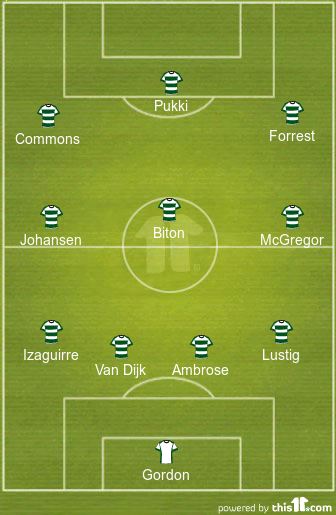 At yesterday’s press conference Deila was keen to stress that there was money available and that loan signings were a sensible option given his lack of time to scout players for his new team.

“It’s a very hard market,” Delia said. “But you also have to think that I came very quickly into this job and I didn’t have the full knowledge of every player available and also you don’t know your own team well enough. In the beginning it’s important not to take the biggest chances. If you get players on loan it’s possible to see them and your own team.”

This plays against the latest fan favourite theory that Deila has been brought in as a malleable pupil to Emperor Lawell’s Dark Lord. At this stage loan signings reduce some of the risk of making major outlays on players that Deila may not yet be sure about. I am confident that by the end of the transfer market he will have been supported by Lawell with the necessary funds to bring in the players that he feels his needs to not embarrass ourselves in the Champions League/make a credible run in the Europa League.

How will the Perth side do post May? (NOT the month)

St Johnstone will be keen to build on their winning start to the season after their 2-1 victory against Ross County on Saturday. There is no doubt that St Johnstone will miss May – indeed there are one or two Cynics out there who are pretty disappointed that he isn’t pulling on the hoops against his old club tonight rather than featuring in the Capital One Cup. Whether St Johnstone can replace May’s goals remains to be seen – what is disappointing is that a modestly run club like the Saints can’t do anything to compete with the wages that the Championship can offer. Chairman Steve Brown said

“The fact of the matter is that we can’t compete with offers from the Championship which is one of the richest leagues in world football. It could well be a stepping stone to the Premier League and hopefully it proves to be just that for Stevie.”

Aside from May’s departure, St Johnstone will be relatively unchanged. Bryan Easton returns to the Saints squad but the game will come too early for Murray Davidson. For Celtic Scott Brown remains a long term injury, though James Forrest may return to offer another wide option that may bring Deila closer to his vision. 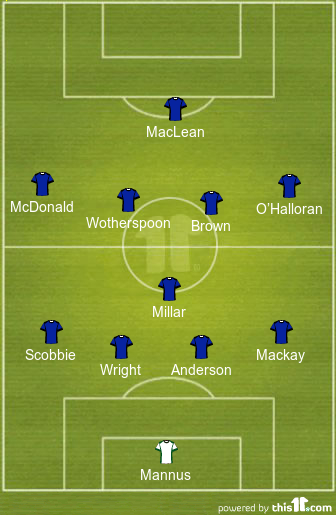 It was inevitable that Fraser Forster would leave Celtic this summer and the £10m they received for him is a solid return on a £2m investment. Gordon looks to be lined up as his replacement – how shrewd a move this turns out to be will depend on his fitnees. If he can play week in, week out and re-capture some of the form that saw him move to Sunderland for just a shade under the transfer fee that captured Forster, then this may prove to be excellent business. If his knee is still troubling him and we get past the transfer window and discover our new Number One is a crock then, this will add further fuel to the ire of some Celtic fans who feel that financial prudence is being prioritised over footballing success.

Pukki vs Griffiths vs Stokes

Deila is clearly feeling out who he likes and dislikes in his squad. Pukki may be a player who flourishes under a new philosophy however, it may not be as an out and out striker that Celtic get the best out of him. This leaves Griffiths and Stokes as our other alternatives – from photos shared on social media and some less than scintillating performances, Griffiths looks overweight and unfancied. Likewise Stokes may be sporting a new head of hair but this doesn’t appear to be convincing his new manager that he is worth the baggage that comes with him. Somebody needs to stake a claim and McDiarmid Park may be the place that they choose to do it…..

As Deila and his squad get the measure of each other there will be some players who choose to step up and want to make a mark, others will decide that the new ways aren’t for them and will want to leave. Whether it is the ‘make a mark players’ or the ‘shop window brigade’ I expect a better performance from Celtic and a 3-1 victory to be recorded.

Who will come out on top in Perth? Will Deila outfox Wright? Comment below or tweet us @90minutecynic