Celtic should not be facing must-win games in the league in mid-October but some poor domestic results and a league table that shows them sitting 6th and 6 points off the top mean that Saturday’s trip to Ross-shire has taken on this status. Ronnie Deila needs a win and a convincing performance to start showing some of the potential that was initially promised when he joined the club. A trip to the Highlands after an international break where some players only arrived back on Wednesday evening will prove a significant challenge – although County sit bottom of the league their last two outings have seen them pick up their first points of the campaign.

Celtic were woeful against Hamilton two weeks ago with numerous chances spurned. – Deila admitted this earlier this week:

“We weren’t good enough against Hamilton in front of goal. We created a lot of chances but didn’t manage to put the ball in the net.”.

It is a major concern how difficult Deila appears to find setting up a team in the SPFL to counter how nearly every team will line up against Celtic – with 10 men behind the ball and aiming to attack on the break. His insistence on playing one up front has paid dividends in the Europa League with the extra resources in midfield allowing his side to soak up pressure in two tight encounters. Against allegedly inferior teams in the SPFL, playing two defensive midfielders and one striker seems counter-intuitive and has with the exception of the Dundee United game been a strategy that has paid few dividends.

It would be interesting to see Deila reverse this on Saturday and go with two up front with Scepovic and Guidetti being paired for the first time. Scepovic certainly looks in need of game team ahead of the visit of Astra on Thursday and Guidetti’s superior form may have the desired impact on Scepovic’s.

Scott Brown contradicted this thinking in the pre-match press conference:

Whilst it is admirable to stick with these principles, Deila needs to show evidence that he has a Plan B and can execute on this in the event that things aren’t going his way. 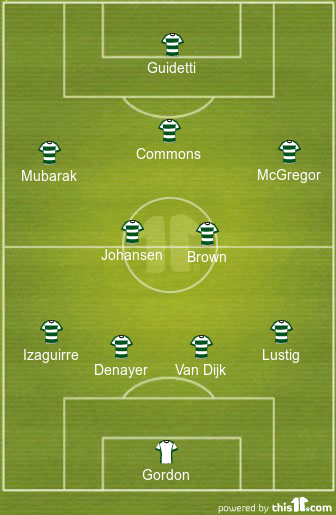 Celtic published their annual report this week and the remuneration report has given the anti-Lawell brigade more ammunition as to whether he is earning his worth at the club. I am a massive fan of Lawell and what he has done commercially for the club – I accept that our signing policy has caused controversy with fans recently but given the limited opportunities for revenue creation in Scotland at the moment, the days of being able to speculate to accumulate are over for the time being. As CEO Lawell has executive accountability for the appointment of the manager and it is looking 50/50 as to whether his gamble to go down the unknown route with Deila will pay off.

If Celtic’s domestic form doesn’t improve and Deila has to be replaced in the New Year, it will make Lawell’s position completely untenable and he will have to ‘fall on his sword’ in response. This will mean that Celtic would need to replace both a manager and a Chief Executive – a task that seems preposterous given that this was supposed to have been 3 seasons of stability that set us up for the next 10…

One massive bonus for Celtic for the match will be the return of Lustig and Matthews from injury. I expect Lustig to be given the nod ahead of Ambrose and Matthews, assuming that he remains fit – this will give us a vital boost on the right that Ambrose’s presence has failed to in Lustig’s absence. This will give Deila a choice as to whether to stick with the central defensive pairing of Denayer and Van Dijk or to move Ambrose back to this position – given that he was one of the late returnees from international duty and has had no real break over the summer, I expect Ambrose to start on the bench.

Jim McIntyre has taken the opportunity to freshen up the Ross County squad as he continues to assess his requirements for avoiding relegation following his appointment after Derek Adams was sacked. He has signed two free agents – defender Jamie Reckford and midfielder Terry Dunfield. In addition former Motherwell defender Paul Quinn has joined on trial. Reckford and Dunfield are available for selection and Jackson Irvine’s exclusion due to playing his parent club may create a place in the starting XI for Dunfield. 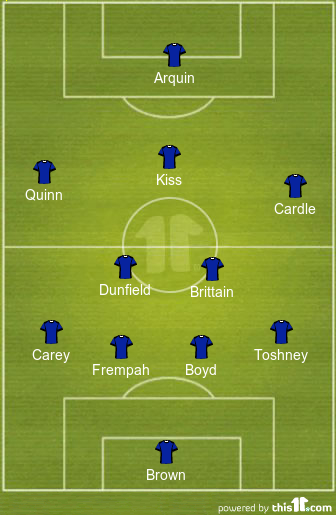 Two managers, both at the start of their respective employment with new clubs and under pressure for very different reasons. Deila needs to start delivering results and return his team to the top of the table where they belong – there are many Celtic fans wedded to the idea of Deila and the benefits that it could bring if it all goes right – he needs to start re-paying this faith or the nay-sayers will win out on this one. For McIntyre its about continuing the better form that his team have started to exhibit in order to move themselves off the foot of the table.

It feels like I was writing an entirely similar set of words regarding Liam Henderson last season – McGregor’s excellent early season form has dipped in recent weeks and he has looked like the expectation of being both a goal score and a consistent high performer were weighing on him. With Tonev and Berget showing little that would suggest that their stay should be extended, McGregor has a good chance for an extended run in the team and a chance to build a solid understanding with Lustig on the right. He needs to take this opportunity and run with it and play with some of the youthful abandon that was so infectious in his early games for the club.

I have given up on predicting that Celtic will keep clean sheets but I’m hoping that we will be able to perform well enough to win this one by a goal or two. I’m going for 2-1 Celtic. Anything other than a Celtic win and the potential permutations for the rest of the season make unpleasant thinking….

WHO WILL COME OUT ON TOP IN THE HIGHLANDS? WILL ROSS COUNTY HEAP MORE MISERY ON DEILA? COMMENT BELOW OR TWEET US @90MINUTECYNIC