Following an impressive display in their Europa League tie against Red Bull Salzburg that earned them a 2-2 draw in arguably their toughest game of the group stage, Celtic return to league business and welcome last season’s runners up Motherwell to Celtic Park. Stuart McCall’s men have struggled to re-capture the form that they showed last season winning only two of their first six games with both of their wins coming against the only teams who sit below them in the league. Ronnie Deila will be keen to maintain the momentum built up over the past 8 days but also be mindful of using the depth within his squad given that his side face 6 games in the next two and a half weeks before the next international break.

Celtic can take a lot of credit for Thursday’s performance and result in Salzburg. They lined up with what looked like a very attacking formation for an away game against the number one seeds in the group but Deila’s team looked far more composed than they have done at any other point in this season’s European campaign. The pace and finishing of Mubarak Wakaso led to a timely opener – it was a very impressive debut from the player and if he can continue to show that he is over the attitude problems that have followed him throughout his career then he could prove to be a valuable addition to the team.

Alan levelled for Salzburg with the type of comedy deflection supplied by Efe Ambrose that we have come to expect from the player who makes Ramon Vega look like Paolo Maldini. Celtic showed good resilience in riding out a period of strong Salzburg pressure at the start of the second half before taking the lead again via another lucky deflection from a Scott Brown shot. Soriano was able to level up for the Austrians with a stunning free kick of the highest quality – given the form that Craig Gordon it was going to take something special to beat him and this free kick was top drawer.

Whilst Celtic looked impressive going forward and the re-integration of Kris Commons into the side looked to be a very positive addition it is at the back where Celtic will need to address some serious concerns if they are to progress. Through injuries and fatigue Celtic look extremely exposed both in terms of depth and talent in both full back positions. Last season we had three strong candidates vying for the Right Back position however Matthews, Lustig and Fisher have all spent more time on the treatment table than on the pitch this season.

This has left Deila with no option but to continue with Efe Ambrose at Right Back – the best that can be said about this is that it is a positive as Ambrose can do marginally less damage than when he plays at Centre Back! I called out on a number of occasions last season that we were woefully short of cover at Left Back – I don’t believe for a second that Izzaguirre has become a bad player overnight however I can believe that he is shattered having faced a minimal summer break due to his involvement at the World Cup. Izzy appears to be making up for the defencies in his fitness by kicking anything that moves – indeed it was an absolutely needless foul from him that led to Soriano’s free kick.

Van Dijk and Denayer are just establishing a partnership with each other so the odd mistake can be forgiven at this stage – in some senses I am disappointed that Denayer has become a first choice pick given that he is a loan signing who we are cultivating for another team rather than someone who we have an opportunity to purchase at the end of his term. Given the likelihood of Denayer getting near the Manchester City team next season this means that we are likely doing this for the likes of Stoke or Sunderland which makes this even more galling. Compared to the thought of Ambrose back at Centre Back though…..

The high spot of the defence has undoubtedly been Craig Gordon. With the usual caveats around ongoing fitness Gordon looks to be our buy of the season and his performances and in particular his comfort in dealing with crosses and his willingness to come to close down players has highlighted some of the deficiencies in Fraser Forster’s game that we had got used to over the past couple of seasons.

Whilst it is early to be talking about the transfer window it was clear that Deila’s focus in the summer window was in the the forward areas of the team and buying players who could fit his system. John Park and his scouts now desperately need to focus on identifying at least two Centre Backs (assuming Van Dijk moves on) and some cover at Left Back – particularly if we are playing in Europe post-Christmas.

At his press conference Ronnie Deila talked about coming to grips with one of the truisms of Scottish football and being Celtic manager – that clubs are always going to raise their game when they play you:

“If you see a team against Celtic they will be 50 to 100 per cent better than they were in the last game,” he said. “It’s like a cup final for them, and that’s why every game is difficult in Scotland. It doesn’t surprise me. I’ve been the underdog before and when you meet a big team you have nothing to lose and just go for it.”

Despite Motherwell’s poor form Deila knows that he can’t underestimate the Steelmen: 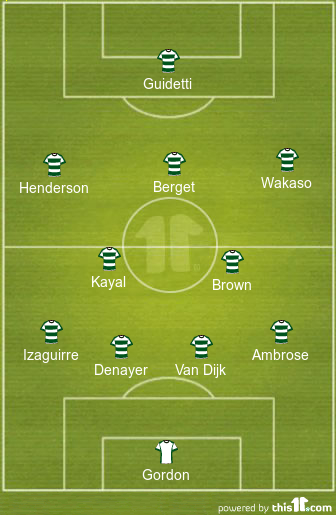 “Motherwell is a task that we have to take very seriously. But still, we are at home and we will do everything we can to put in a good performance and win the game.”

Stuart McCall has worked miracles over the past few seasons, continually turning out impressive league finishes despite working in an environment where players can’t be signed up on long term contracts due to financial constraints. There was always going to come a point where this strategy ran out of road and if their performances this season are anything to by that point may have been reached.

McCall was keen to the importance of balancing attack and defence at Celtic Park.

“Our game plan is based on striking a balance between carrying a threat, obviously you want to score goals and win the game, but we’ve got to ensure we don’t leave big gaps for them to play in” he said. “Having said that, we’ve been so very close to taking something on a number of occasions.”

For Celtic Charlie Mulgrew, Mikael Lustig and James Forrest all remain absent. Stefan Johansen picked up a knock in Salzburg so is likely to be rested for the game. Motherwell have no new injury worries. 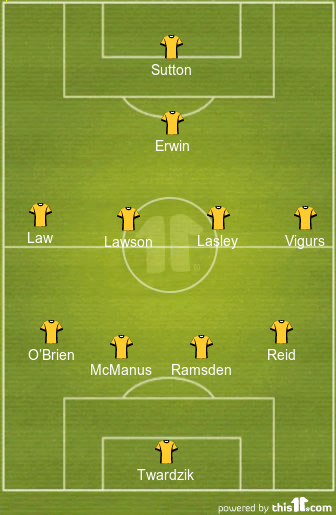 John Guidetti returns to Celtic match day squad following the Europa League match in which he was ineligible. I expect him to start  with Scepovic making way after starting the last two games. Scepovic has admitted that he is only just building up to match fitness and has had a fairly quiet start to his Celtic career – if Guidetti can get on the score sheet tomorrow it will do him the world of good in maintaining his place as Deila’s sole striker.

We are starting to get a better idea of what Deila’s starting XI looks like, though the new boys Tonev, Wakaso, Guidetti and Scepovic will need more time before we can determine whether they fit in this or not. Given the sheer number of games that Celtic have coming up it is vital that players like Nir Biton, Liam Henderson and Jo Inge Berget make an impact when given the chance if they want to challenge for a starting place. Berget has so far looked like justifying our ‘try before you buy’ loan strategy and will be back in Cardiff come Christmas unless he can step up his performances and show why Deila re-signed him for his new club.

I think Deila will take the chance to rotate the squad (though not to the extent that he did at Inverness) and even with new players coming in will be too strong for Motherwell. A clean sheet may be too much to ask for so I’ll go 3-1 Celtic.

WHO WILL COME OUT ON TOP IN GLASGOW? WILL MOTHERWELL HEAP MORE MISERY ON DEILA? COMMENT BELOW OR TWEET US @90MINUTECYNIC

'Can Celtic Make It Two In A Row Against Motherwell?' have no comments