Bayer Leverkusen welcome Werder Bremen to the BayArena on Friday evening with both sides boasting unbeaten records in the embryonic Bundesliga table. Leverkusen have been quick out of the traps with impressive wins over Dortmund and Hertha, whilst Werder fans will be encouraged by the grit Robin Dutt’s side have displayed in fighting back to claim a point in both of their draws.

An interesting showdown is in prospect with Leverkusen’s lightning start approach coming head to head with a more dogged Werder side than in previous seasons. A side that seems intent on shedding its image as a team with a decidedly soft underbelly. As impressive as Leverkusen’s opening day win at Dortmund was, it was run close by Werder, the team that took so many hammerings over the last two years, actually managing to pull themselves out of a hole at Hertha and fight back from two down to grab point.

Leverkusen’s start to the season has been far more brash and spectacular with goals flying in at both ends, Roger Schmidt certainly seems to be an engaging character and the results on the park thus far suggest the players are buying into what they are being asked to do. That they successfully negotiated Copenhagen with relative ease to ensure Champions League football will no doubt buoy the hosts further and the Bayarena will be rocking come kick off time.

Schmidt will do well to ensure his men stay focused on the Werder clash amid a hectic early season schedule and the upcoming Champions League tie with Monaco:

“”I’m focusing on our next game, of course, even if there are some background thoughts being made to the games to come”. 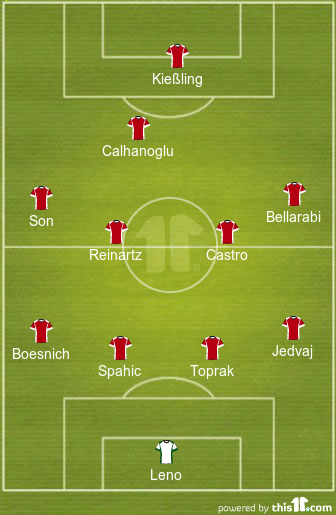 Werder’s 12th place finish last year does not take into account the fact that they only confirmed survival with three games to go, this, coupled with the summer exit of star player, talisman and all-round hero Aaron Hunt disspelled any out and out optimism heading into the new season. Robin Dutt has worked admirably with little to no resources (all free transfers) and has spoken of his desire for Werder to now ‘take the next step’ and believes his side can cause the hosts problems:

“We are going to have eight or nine very quick players on the field….With these kind of qualities, we can make our opponents’ lives difficult.”

After two battling draws, a trip to the early season pace-setters will be a good gauge of just how far Werder are into their rehabilitation.

Going into the game Leverkusen will continue to manage without captain Simon Rolfes, as the experienced midfielder was joined on the treatment table last week by youngster Julian Brandt. With both players expected to be out for 2-3 weeks the impending return of Lars Bender will be a welcome boost. Werder have no new injury problems but midfielder Cedrick Makiadi is not expected to feature in the squad having only returned from international duty with Congo on Thursday morning. 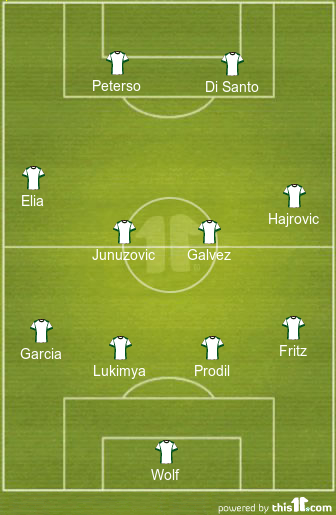 Much will depend on the visitor’s approach in this game. With the home side likely to fly out of the traps early in search of goals, Werder will need to be alert and switched on from the start. Imposing centre half team Assami Lukimya and Sebastian Prodil will have a busy evening with the fluidity of movement that typifies the hosts attacking style. Bellarabi, Hakan Calhanoglu and Stefan Kießling have all started the season well and with Heung-Min Son still to hit form, the home side will be banking on having too much firepower for the visitors.

For Werder, there is hope in that Leverkusen have looked suspect at the back on occasion and Franco Di Santo looks to have matured into something approaching an effective frontman. If they keep solid and look to hit on the break, then there could be something here for them.

I think there may be a chance of a tight game here but with the attacking players on show and both sides vulnerabilities there is a decent chance of a goal-fest. Lets be optimistic

We are always looking for interesting articles, do you think you have something to offer? Email us at editor@90minutecynic.com or Tweet us @90minutecynic

'Bundesliga Match Of The Week: Bayer Leverkusen Vs. Werder Bremen | Match Preview' have no comments